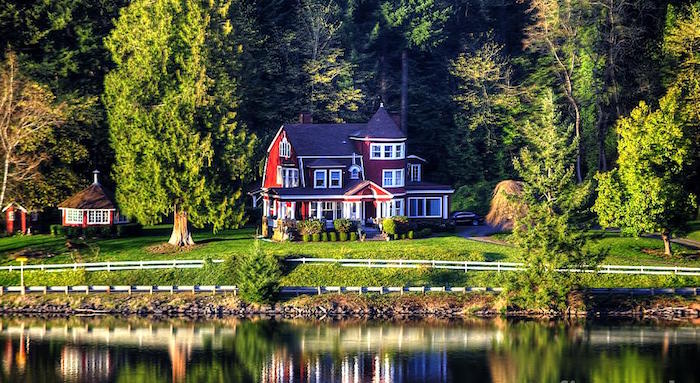 We are big fans of the Queen Anne Victorian-style farmhouse that sits on the north shore of Lacamas Lake. Known as the Leadbetter House, or Lake House, it was a wedding gift from Henry L. and Georgianna Pittock ( Pittock Mansion, Portland, Oregon) to their son, Frederick, and his new bride, Bertha Leadbetter (Pittock).

The home was built in 1901 by John Roffler who left a legacy of lovely Victorian homes throughout the Camas area. Roffler was just 22 years old when the Pittocks hired him to build the two and half story structure. It has been listed on the National Register of Historic Places since 1979.

Descendents of the Pittocks and Leadbetters have been working with the City of Camas to develop more than 80 acres around the iconic red landmark. (The 80 acres is part of the 460-acre development.) Despite some local opposition, city planners, the property owners, and their attorneys claim the plan is for a sustainable, walkable community, mixing single-and multi-family housing, businesses, and commercial development with parks and bike paths.

One thing all parties can agree upon, the now undeveloped character of the north side of Lacamas Lake is going to change dramatically.  We hope the impact to area wildlife with be carefully monitored, and we’ll be be watching the Northshore Project with great interest.