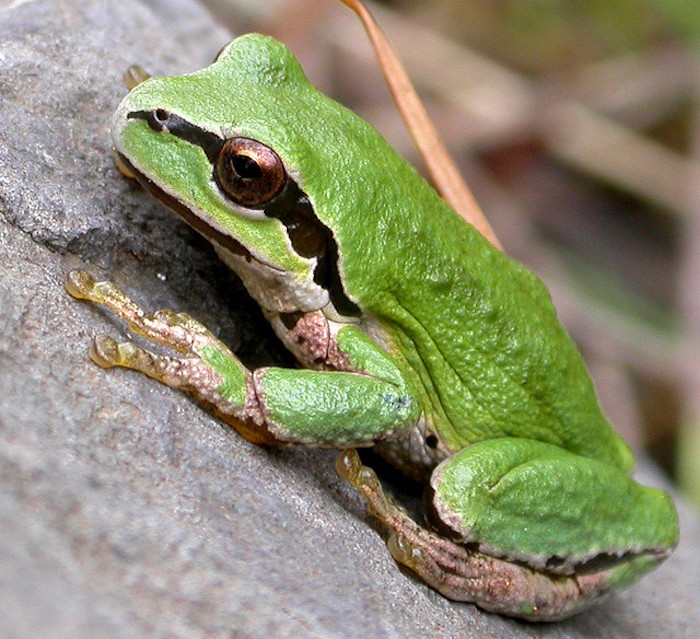 Pacific tree frogs are singing again in our Camas neighborhoods. It’s a sweet sound to this nature lover’s ears. The song, or call of the male tree frog, is a loud two-part ribbit designed to attract females. The chirping stimulates other males to join in, and often, the resulting chorus of their efforts can be heard quite far away.

Pacific Tree frogs, also known as Pacific chorus frogs, are native to Washington and have been the official state amphibian since 2007. Depending upon location, they move into breeding areas from about February to July. Apparently, they’re right on schedule.  We have two ponds nearby and that’s where they’re hanging out for the time being.

Outside of the breeding season, these little frogs actually move several hundred yards away from water and populate different habitats such as woodlands, meadows, pastures and gardens.  They’re beneficial to the environment as they eat insects, including mosquitoes.

They’re nearly everywhere in the Pacific Northwest too. According to Washington state biologists, these vocal frogs are found in rainforests near sea level, to the 11,000 foot level on mountains, and into the dry interior regions of our state – providing there is water available.

Please resist any temptations to keep them as pets, they belong in the habitat where Mother Nature intended. Handling frogs can be hazardous to their health, as lotions and/or bug repellents can be absorbed into their permeable skin.

Tree frogs can be brown, tan, grey or green, and actually change to blend in with their surroundings. They make their charming sound by puffing up their throat sacs to nearly three times the size of their heads.  Imagine that – anything for love, right?

Yes, the froggy’s are courtin’ again in Camas.

We once found ourselves on an unlikely weekend journey with a stow-away frog. Naturally, we worried about the little guy until we’d safely returned home and placed him back in the garden. You can read more about Froggy went a Ridin’ here.

Speaking of natural habitats, you could say that’s our speciality. Let’s hear it for Nature As Neighbors.™